After the letdown of the 2015 Marine Corps Marathon, including the shock of actually being LATE to my first race ever (not to mention coming in a damn HOUR off my PR), I knew I had to keep focused for the Rosaryville 50K, less than 3 weeks away.  But to anyone who asked, I was Perfectly At Peace.

I thought I hid my letdown pretty well during work hours.  My boss had no idea.

I still had to prep for Rosaryville.  The organizers describe the race this way:


Don't get me wrong.  Every Annapolis Striders race I've done (Annapolis 10-miler, Endless Summer 6 Hour, and also this one) is very well-organized.  But WOW.  THIS course is damn hard! First, I think the opening line that the "leaves will be gone" is a reference to the leaves being gone from the TREES.  Because, oh yeah, there were leaves.  So. Many. Leaves. 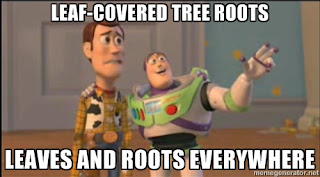 Otherwise, it was going to be 3 loops "mostly in deep woods" of about 10 miles each.  The run to/from the loop portion would get you the necessary distance to the 31 mile mark.  31 miles just has not ever intimidated me since getting comfortable with marathons.  It's only 5 extra miles.  The major difference is that you're typically on trails, which carries with it a different mindset:

Rosaryville, even more than my experience at The North Face 50K, reminded me how Road vs Trail running is so vastly different.

I don't know how else to put it.  This race hurt.  Literally.  I don't think I've ever been as run down as I was after this race.  It was a pain fest from the very start, and really shook my confidence as a runner, DESPITE it being a 50K PR.  I took a rough fall nearing the end of the 2nd loop, and had to fight like hell to convince myself to keep going.

As usual, a TON of Tailwind.  I'd remembered the hard lessons of North Face, and the Endless Summer 6-hour.  I also wore compression socks for a terrible and sad reason.

Wasn't planning to wear compression socks for tomorrow's race (Rosaryville 50K), but they're the right colors for a horrible reason. #ViveLaFrance #StandWithFrance #Paris
A photo posted by Tai Fung (@tai_fung) on Nov 13, 2015 at 5:20pm PST

Otherwise, I was in shorts (it wasn't SUPER cold), my #Beakertude undershirt, and a half-zip over it.  Warm, yet a little bit of movement.  Turns out that long sleeve half zip would save me a lot of pain.

I met up with MidpackBiped pre-race, and we chatted about our plans for the day (you can chat with him at his blog if you like as well).  I mentioned wanting to at least come in under 7 hours, but candidly not knowing what to expect.  I just wasn't feeling it.  He was customarily more optimistic, which I suspect comes from being fast.  He was talking about some finishing times I would have LOVED.  I tried to relate.


We didn't have much time to chat before HONK, the horn went off, and the race started.  Midpack let me tail him for the start of the first loop.

The loops themselves are just about 10 miles.  You make up the remaining distance to reach 50K during the run to/from the start line.  Midpack and a friend of his started gaining distance on me, but I knew I couldn't hang at the rate he would likely do.  I wanted to run my race, and conserve energy.  Also note the "no leaves" in this picture!


Pretty early on in this loop, I started clipping tree roots, or the odd jutting rock, with my feet.  Each one was a sickening SLAP, usually causing a stutter step.  I often couldn't see them, and would get taken my surprise.

This loop took almost exactly 2 hours, and it wasn't like I was pushing THAT hard.  Fuck.  If I could pull this off twice more, I'd come close to 6 hours and change.  At the VERY least, I'd be under 7 hours without a smidgen of trouble.

Trees:  "HAHAHAHHAHAHA YOU GON DIE LATER WHEN YOU PASS BY AGAIN!!!!!!!"


My compression socks were getting a mite painful in one foot, but I ignored them.  I refilled with Tailwind, and took off.

The trees were waiting.

After refiling my Tailwind, I was pretty deep into loop number 2 at this point.  It had gone along well enough, although the tripping was still happening, despite my making an effort to really look out for the roots.  They were just frequently hidden under fallen leaves.

Then, with Loop 2 nearly completed, it happened.  I struck another root, but hit it deep enough with my lead foot, and couldn't get my rear foot to shoot forward in time.

I'm surprised it didn't cause a tremor in the Earth.

Because when someone MY size goes down in a flying fall like that, it's not like this:

I slammed down, and got a forearm out, which caught a lovely patch of jagged rocks -- I'm glad I had a long sleeved shirt on, because those would have shredded my arm.  Instead, I just got dirty up top.  My knees were a different story.  I came down so hard on my left knee (heretofore the "good" knee) that I was immediately aware of the pain.  I kinda just . . . laid there. In the dirt, rocks, and roots.  I laid there almost a full minute and just kind of . . . assessed myself.


This was actually my FIRST ever fall during any trail race or ultra.  I'd always been lucky in prior races, I suppose.  But this one was a doozy.

Slowly, I stood.  I brushed myself off, cleaned a little blood up.  By my reckoning, I only had about 2-3ish miles to the loop point, and figured I'd give myself a once-over while there.  After a bit of walking, I started to run after a short bit, and made it back to the aid station start.

This loop took 2 hours and 15 minutes, so about 15 minutes more than the last loop.  I was pretty sure I was at a "First Loop" comparable pace before the Grand Slam.

I came into the aid station, and a volunteer immediately spotted me, along with my knee (which, I decided in retrospect, had swollen up so much it probably got there ahead of me).

They just kind of stopped talking a moment, and just . . . looked at me.

I explained that it was mostly dirt running down my leg, and not blood, and that I was fine (I didn't mention the part about being a giant fatass and that my body hurt like hell).  I'm sure I thought I was quite clever, because after all doesn't blood and dirt look the same to everyone? #ColorBlindnessProblems

Loop 3 (headed to the finish, of 31.1 miles) (Michael Stipe singing "Everybody Hurts")

I took off my half-zip, which was pretty dirty anyway, because I was starting to warm up a bit.  I thought that if I was net 2 degrees less hot, I'd somehow run faster (spoiler alert:  I just ended up being cold for like 3 hours).  I took off my compression socks, one of which was just CAKED with blood from a burst blister.  Running is so glam.  I switched into some soft socks, grabbed some Starburst Minis to bring with whatever remaining Tailwind I'd poured into my hydration vest, and I was on my way.

I was NOT going to DNF over a stupid fall.  People fall all the time.  I wasn't moving GREAT, but I was ok.  See you in 10 miles, aid station peeps:

Another fall happened during this loop, but it was more of a "slip, which then turned into doing the involuntary splits in some loose dirt."  That didn't feel good on my groin.  But I was deep in the woods now, and it was almost farther to turn back and/or DNF than just to push on.  During trail races, people fall.  Sometimes they fall a lot.  In ultra trail races, you fall while covering a shit ton of distance.  It's just life.  You can't wallow over this stuff.


I think what was MORE upsetting for this third loop was how often I was alone.  The North Face has many, many "confidence ribbons" put out, which I teased about because they were color coded.  The Annapolis Striders, as a smaller running organization, had some white ribbons out, but not a ton.  There were a few points where I just found myself quite alone and guessing about where I should be going.


I usually felt ok about my direction, but a few times, I just kinda stopped trotting, and said, "Fuck, I'm lost."  Then, in the distance, I'd see a white ribbon and just motor to it.


I hadn't forgotten the hydration disaster I had at the Endless Summer 6-hour run I did, so when the liters upon liters of Tailwind-infused water had, um, done their Thing, I had to do mine.  And proceeded to do so.  A LOT.


[Repeat that GIF approximately every 10 minutes]

[Repeat finding a tree over and over again, then hoping it wasn't actually an Elf.]

I wound my way to the finish, which took WAY longer than it should have, and had me WAY colder than I wanted to be.  But my knee still wasn't great, and I felt ridiculously concerned over another Unplanned Trip Downward.  So I clocked in over 7 hours, still bettering my prior 50K time by about 30 minutes.  It was a PR.

I'd love to talk about what a "not very technical" course looks like, because in many ways, this course was WAY harder than the North Face 50K, even with its crazy elevation switches.  The hidden trip wires made this an ordeal.  I remarked to a volunteer that I fully expected to hit a root with my CAR on the drive out of the park.

The inside of my left knee stayed swollen up that night.  It was like my knee had a knee.

But it was over.  Not just the race, but the race SEASON.  Done.  A year of mostly downs, to be honest.  Disappointments.  Except, as I wrote in a different IG pic (not reproducing it, I can't post so many selfies without making ME barf out of sheer disgust and Hate Reading), we GET to race.  We GET to train.  We can DO these things that some people don't even consider for a second.  We go 30+ miles and say, "Darn, I would have like to have done that faster," instead of, "I feel so lucky to be healthy enough to GO THIRTY FUCKING MILES."

I needed to take a chill pill and quit feeling so dejected because I didn't get what I wanted.

One note:  2 days before this ultra, I attended the "Washington DC Food Fight" put on by the DC Central Kitchen as a "VIP Gold" member.  Amazing food.  Open bar.  Great idea.


You bet it is.  Serve the food, pour the wine, and Vive La France.