I wasn't in a good mood for much of this summer, with my running severely limited to shorter distances. Thanks #PITAChat


Now August was winding down, and I was preparing to move to the west coast at the end of the month.  It was time to begin a Very Different Life than what I've experienced for some time.  Not feeling like myself as a runner was having side effects on my mood.

Because I'm into symbolism and marking important events, I REALLY wanted to do a kind of "farewell to DC" race, but just couldn't make it work with all my various goodbye trips. Plus goodbye happy hours, goodbye luncheons.  Goodbye time for racing.

In the meantime, I'd marked my LAST Nats game as a DC resident, my LAST time running the Mall, my LAST time on the Mount Vernon Trail . . . etc.  Between my penchant for marking "lasts," and all the goodbyes, they were having quite an effect on me.


I was packing in the symbolism.  I had to.  Because I wouldn't even BE in DC all of August.  I was going to be in Philadelphia to see an old buddy before I headed to the west coast. As a couple of Gen Xers, we figured a boozy weekend might be fun before I headed out.  NO, NOT THAT KIND OF WEEKEND.

All of a sudden, early in race week, I got a message -- he's having a baby soon (well, his wife is), so he felt he had to bail.  Ok, fair enough.  Out of all people *I* ought to get making sacrifices and choices for children.

I just hadn't trained.  20K is 12.4 miles.  I hadn't run farther than 6 miles with the literal pain in my ass.  In fact, most training runs were just over 4 miles.  BUT DID I MENTION I WANTED A SEND-OFF RACE??

Fuck it, I'm in. Let's run! I registered online, and was already giddy at the prospect of a farewell run. Plus, Leesburg is where my daughter moved to back in 2013 (that's related to SOME of the personal/legal/family drama I experienced that year).

My daughter is my partner in crime. We go see movies together, assuming the movie is animated, or has a superhero, or a hobbit. This race would take me right by her high school, so that was a nice touch, too.

The day before the race, instead of resting, I took her to see "The Secret Life of Pets," at her request.  It meant that I had to drive an hour out to Leesburg from Capitol Hill to be with her.  We did dinner, dessert, and the movie. It was worth the haul out there, even if I'd have to make the same round trip in about 12 hours.

It was a sweet movie.  Not great, but sweet.  But, towards the end, this song plays as a little montage of pet owners come home to their beloved pets.  And there I am, in the dark, like a fuckin' dork . . .  Crying.


This little scene isn't THAT tear-inducing.  What happened was that right then it hit me -- I worried it was the last time I'd sit next to her in a theater.  Because, you know, I was rather Primed for Symbolism.  The lyrics were sweet, and when the lights came up, she turned to me with a big smile, and everything was still routine.

I dropped her off with her mom, and headed back to DC, stopping for powerbars in a supermarket (needed breakfast in a few hours before the race!), and FUCK if this damn song wasn't being piped in at the DC "UnSafeway."


I of course teared up, but you can't show weakness in a place like that. You'll be cold cuts.  But the song was now in my head.  I suspected it would be for the race too.  I got home, and between dinner, the movie, dessert, the LONG drive home, and Safeway, I realized . . . it was WAY fuckin' late.

I did the math on how much sleep I'd get:

I made the trip (back) out to Leesburg.  I just BARELY got parking on the very top level of the parking deck by the start (protip for this race:  yes, they do have parking nearby, but that thing fills up FAST).  I then got in the hay-uge line to pickup my shirt/bib (and race pin!).
After barely making it to the start line, I told myself that, no matter what, I had to treat this race as a long run with a bunch of friends, and just have Zero Competitiveness.  My ass would thank me.

I forget what a nice small feel Potomac River Running races are.  The Leesburg 20K is a well-attended race, but it just isn't so large that you feel you're in an absolute mob.  I knew that within a mile or so, we'd be well-lengthened out.

BANG! Off went the gun, and off we went.

I figured for this race, I'd have to run by feel.  If my booty started to hurt (which it typically would do after 3-4 miles), I'd be in deep trouble, and would have to walk/run the course.  So it seemed to me that slower was smarter.

Based on the summer I'd had, that wouldn't be a problem.

The first mile was crowded, but despite that I went faster than I wanted, for having NO idea what would happen to my body doing double the distance I'd been training at lately.  So of course, I sped up.

"Well, this is BULLSHIT," I thought to myself as I ran.  I had a vision of what mile 7 would be like, with 5 more miles to go.

So.  Enough of THAT shit.

Dialing it back had a rather . . . humbling effect on me.  People were passing me like there were only 2 miles or so to go, instead of, you know, more than TEN miles.

I made my way into an initial clearing, just trying to keep good spirits.  My farewell race!   Happy!  New life ahead!  Totally not going to finish last!  Maybe.

Starting about the 4th mile, there was a pretty significant (relatively speaking) climb, and just kind of sustained through mile 5.  I was still holding back, although (who I am kidding?) that climb was NOT fun.  But I kept smiling.

Those "Lovely Day" lyrics were creeping back into my head.


When the day that lies ahead of meSeems impossible to face


When someone else instead of meAlways seems to know the way

We passed an exit sign with my daughter's new home street on it.  Ugh.  I'm going to miss her so much.  But this isn't the end of our relationship just because I'm taking steps not to ruin other lives.  She's in her senior year.  She's looking at colleges.  She'll still be my partner in (movie) crime, right?

Press on.  We were over the hill, and now I could make up some time on the downhill.

Fuck, you know what?  I'm not sure anything hurts THAT badly.  This isn't going that badly.  I'm smiling, thanking volunteers, and generally just having . . . fun.


We came to the turnaround.  I was now in a position where I was closer to being finished than from the start.  We headed back.

Of course, it meant that the hill I'd just climbed and then ran down needed to be RE-climbed again.

Whatever.  I did my thing, grinding my way back up the hill.  I decided that about the point we went back DOWN, I'd try and reevaluate pace.

That put me around mile 9.  So, I'd decided to increase "speed" back to the mid-10 minutes per mile again, just to see how my body would react. 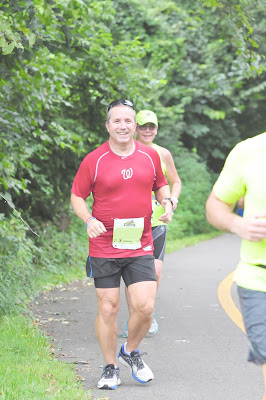 I was now starting to pass some familiar faces/bodies as I picked up the pace.  Negative splits are for realz.  Mile 10 featured a slight slowdown for water/Gu, but no biggie.  I went right back to my "faster" (ha) pace, and the last 4 miles were just enjoyable.  I had the same PITA soreness I'd come to expect, but nothing debilitating.  Plus, hell, I was approaching mile 11 after having not really gone beyond 6 for the summer.  I SHOULD be a touch sore from the effort!

Anyway.  I pressed on.

Good thing the "plan" was to get my ass kicked and finish at the back of the pack.

Finally, mercifully, because I really was feeling myself start to fade from miles 11-12, we'd made our way off the W&OD path, and back onto city streets to finish.  I actually think I saw a few folks I know from Instagram (not Twitter, of all things!), and also made some new friends via the pics.  Ok, fine, I picked up a few IG followers because NARCISSIST.

Time for a quick IG post from the parking deck, and then back to DC.  I needed to finish logistics (read:  sleep, eat take-out Chinese food, and convince myself that this was a good move, long term).


Leesburg 20K run! Last minute decision to run this (despite not having gone more than 10K in a single run since June). My daughter (a Loudon HS student!) lives out here, and I was happy to close out my DC "local" races here in her neighborhood. I had a steady pace, hit negative splits, and nothing hurt (except my pride, haha). I'm just glad my piriformis is healing up. #PainInTheAssChat Farewell DC racing (as a local, I'll be back). ❤️💔
A post shared by Tai Fung (@tai_fung) on Aug 21, 2016 at 7:27am PDT


Race by the numbers:

Ask me if I care (spoiler alert:  I do, but also I don't).  I got to have a meaningful goodbye. 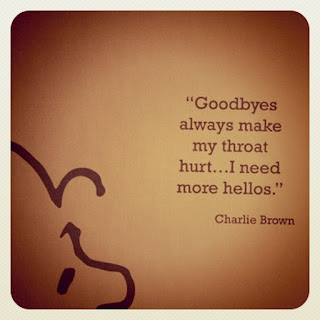 And now it's time for some hellos.